Raise your hand if you are forever looking for the other mitten that matches the one your child is demanding to wear. Or maybe you have a pile of artwork and whatever gets sent home from school that your child really wants you to keep but you have no idea what it is and you’re left wondering if dried noodles glued to things ever… get gross?

I was that mom, you guys. Then I had a second kid and thought, NO, MA’AM! and I came up with a better way. (Then I had kids 3 and 4 and was extra glad I got organized!)

I’m going to show you a genius thing that we could have all been doing all along, but now that we’re in quarantine (again) and on the verge of losing our minds, maybe tackling little corners of clutter and putting them in storage will take our anxiety down a notch.

We have something called The Forever Box in our house and it is well known. Not just anything makes it into The Forever Box, and I’ve really talked this box up so it has become a big deal around here.

Each kid has their own box–well, technically, they have two boxes. One box, which is just a photo storage box from the craft store, holds their tiny baby things. I have their hospital bracelets, hospital hats, first booties, coming home outfits, first rattles… all those tiny but super cute things we just can’t part with. I have an old dresser in our basement (that has four drawers) and each drawer has the stuff from each kid. It might hold a baby blanket, handmade sweaters that maybe they want to hand down, and other items that we’ve become sentimentally attached to.

The other Forever Box, and the one I really want to talk about today, is for artwork and crafts that the kids have made. I know that all kids will accumulate enough stuff to fill a landfill from elementary school alone, and I know you want to save it all when it’s your kid who comes home with a handprint turkey. I’m going to tell you this nicely: you can’t keep it all. I don’t want to watch you on a show about hoarders; it’s really okay to recycle crafts and I’m going to help you do just that.

The solution is SO EASY.

Hear me out! It’s a clear box, with a lid, and it will be labeled. Stay with me. The beauty is that you are limited to ONE BOX PER CHILD.

I know, I heard your gasp and I know your blood pressure went up a bit, but I promise you, it is possible.

Get yourself to the Motherland, Target, where I know you will stray and buy a lot of stuff you don’t need (but girl, go ahead and buy the fake plant and super soft blanket, you deserve it), but let’s for sure get these things: 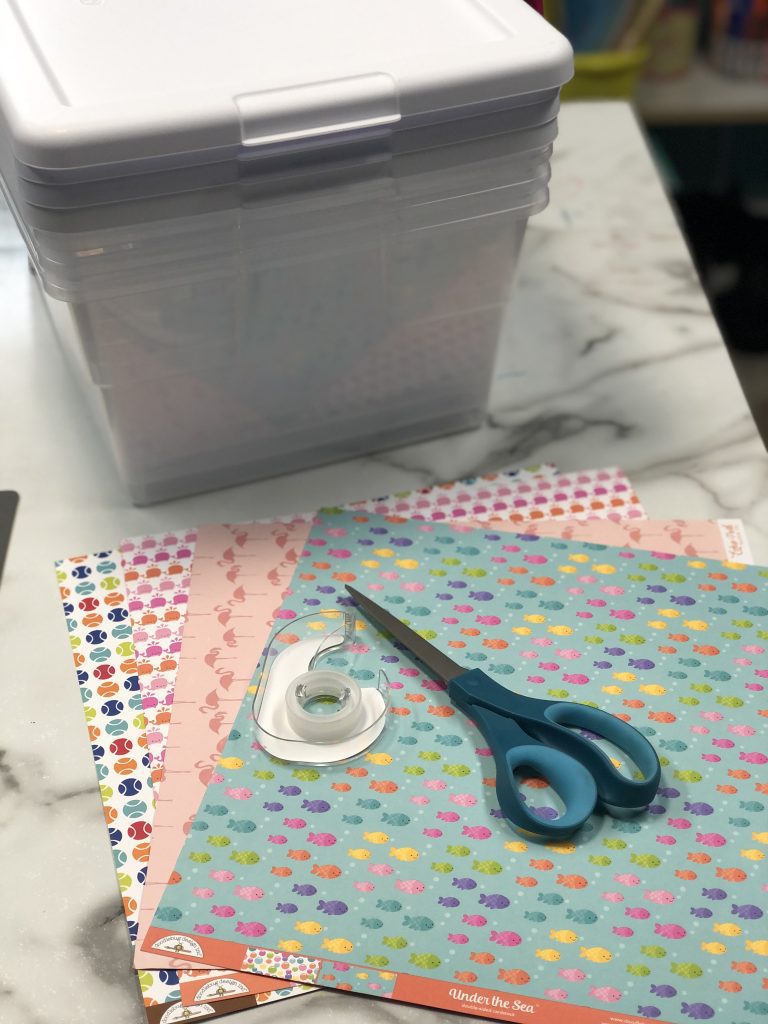 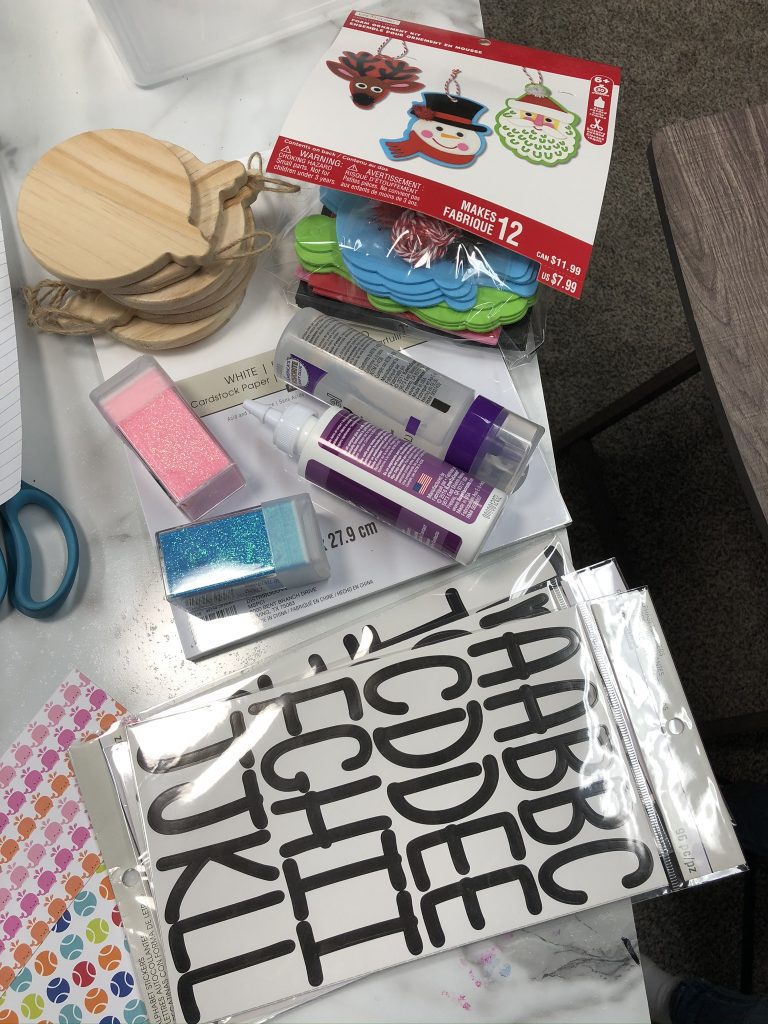 Now, I forgot my letter stickers in my first trip so I went to Michaels to use my coupon and let’s just say mistakes were made and I bought more than I needed.

When you get home, look at the pile you are going to tackle. I mean really look at it so it knows you’re not messing around. 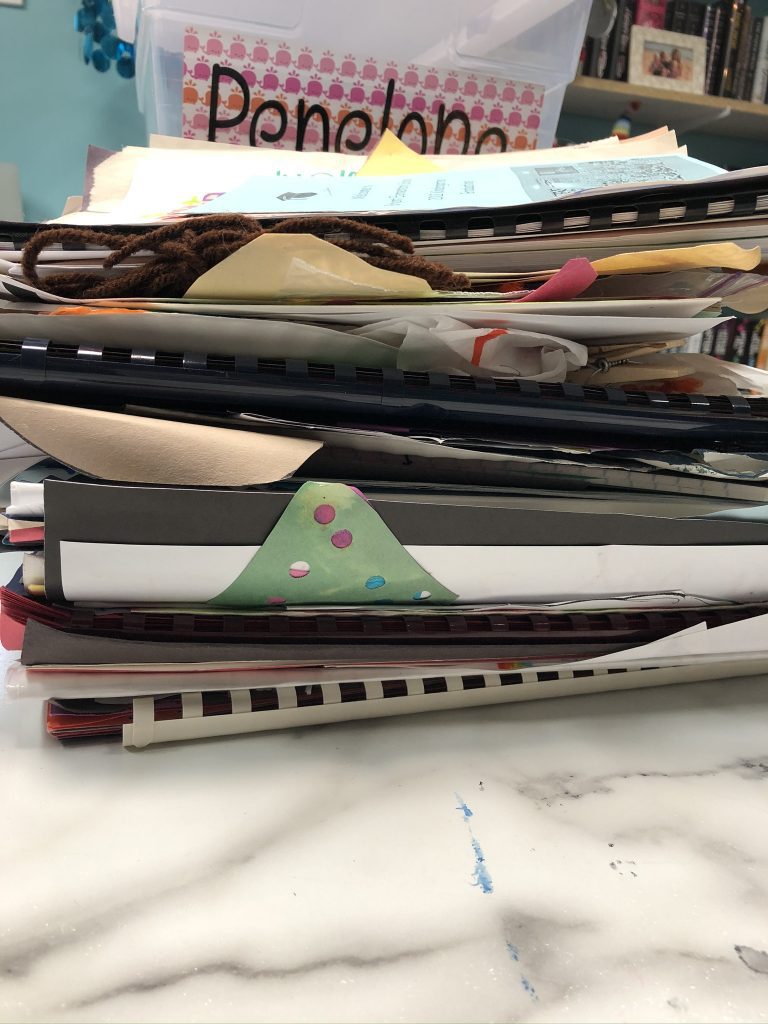 Let’s get your boxes ready though, because you can’t do anything until these boxes are ready, am I right?

You need to peel the ugly sticker off the box, and then measure how big of a label you want. I like big labels so mine ended up being 8 ½ inches wide and 3 inches tall. I used a different paper for each kid. I had scrapbook paper sitting here from a school project we forgot to do, but you could use printer paper or construction paper too.

Stick your letter stickers on the paper and then and use the clear packaging tape to tape the label onto the front of the box. The short side is what I was using as my front, but it doesn’t matter, whatever works in your space that you’ll store these in. I taped all four sides because I’m a bit neurotic so just ignore me. 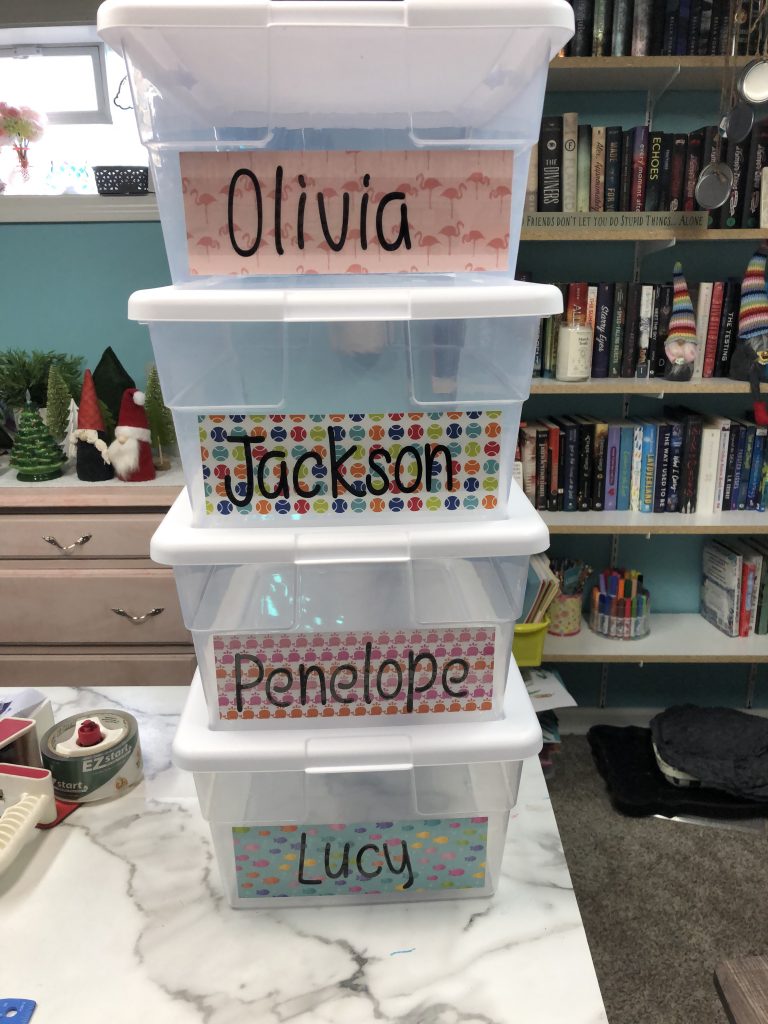 I showed you the pile I was working with above, but it wasn’t just those papers. I had first Boy Scout uniform and Girl Scouts vest, patches and bigger art things they’ve made, literally all kinds of stuff. The easiest way to do it is one item at a time.

My oldest started high school this year, while my son is in middle school. I also have a kindergartner and a preschooler, so the younger two didn’t have a lot of accumulation yet. I saved some name tags from preschool that were cute, things saying “mom is the best ever” because you need something to wave at them when they are a teenager and telling you that you’re actually the worst.

The bonus to having so much time go by before I tackled this is that for a lot of it, I had no idea why I saved it in the first place so I automatically threw those out. If I can’t remember why it’s special now, I definitely won’t in ten years. Lots of things I did remember or I absolutely laughed at and I had to keep those. 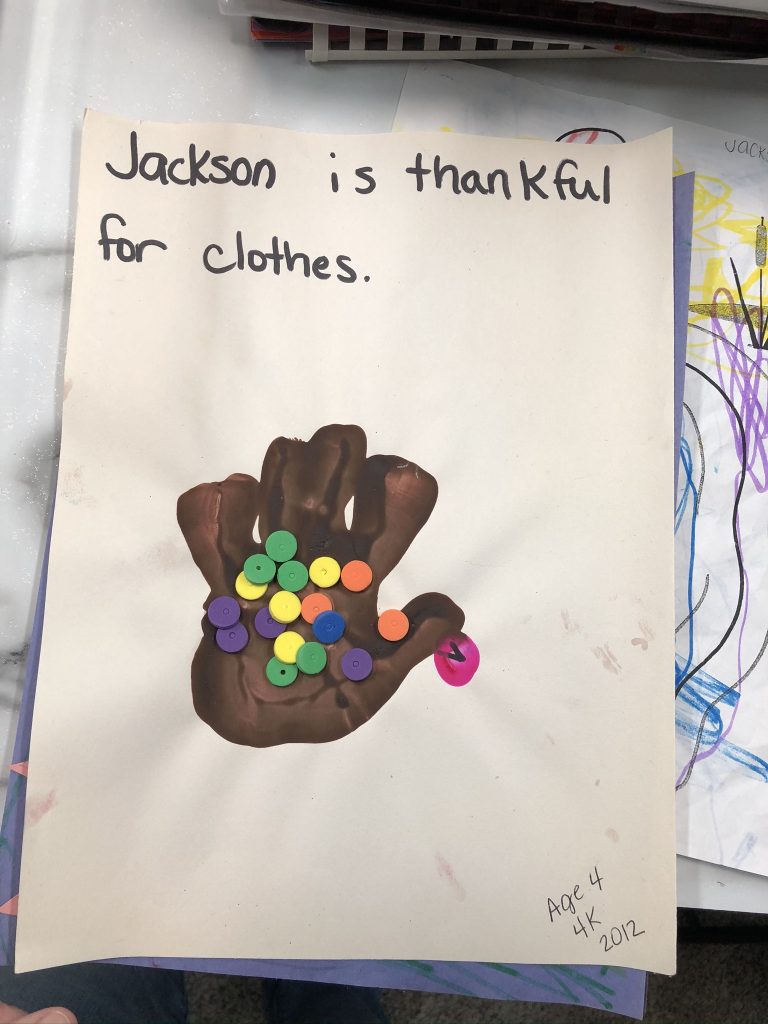 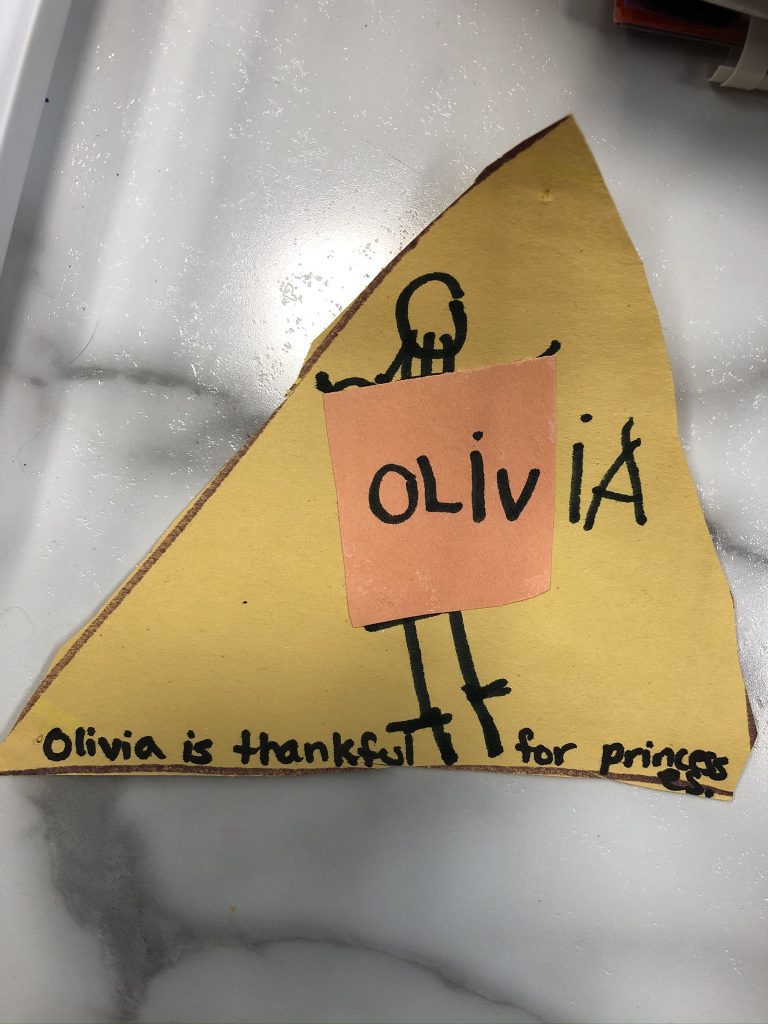 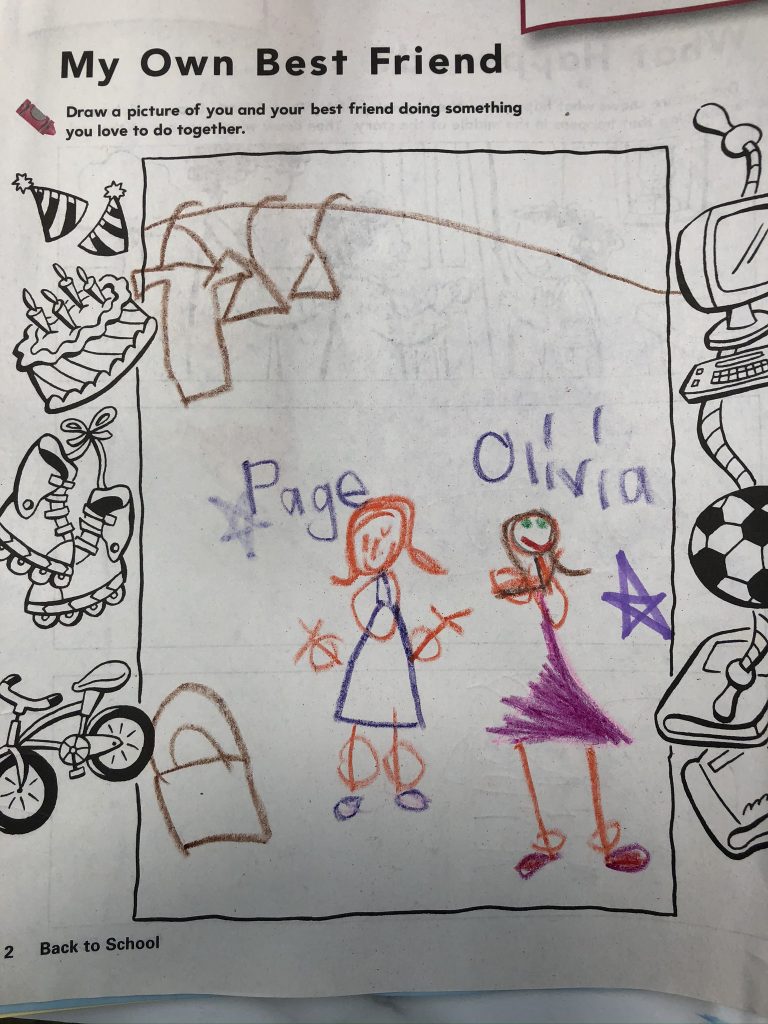 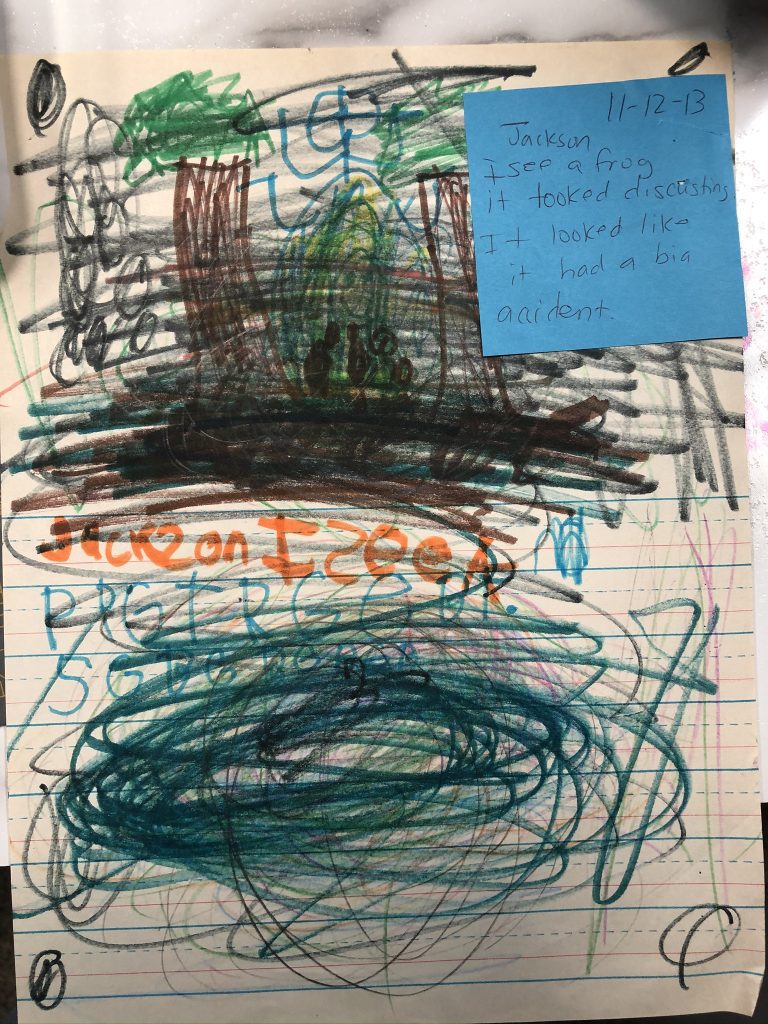 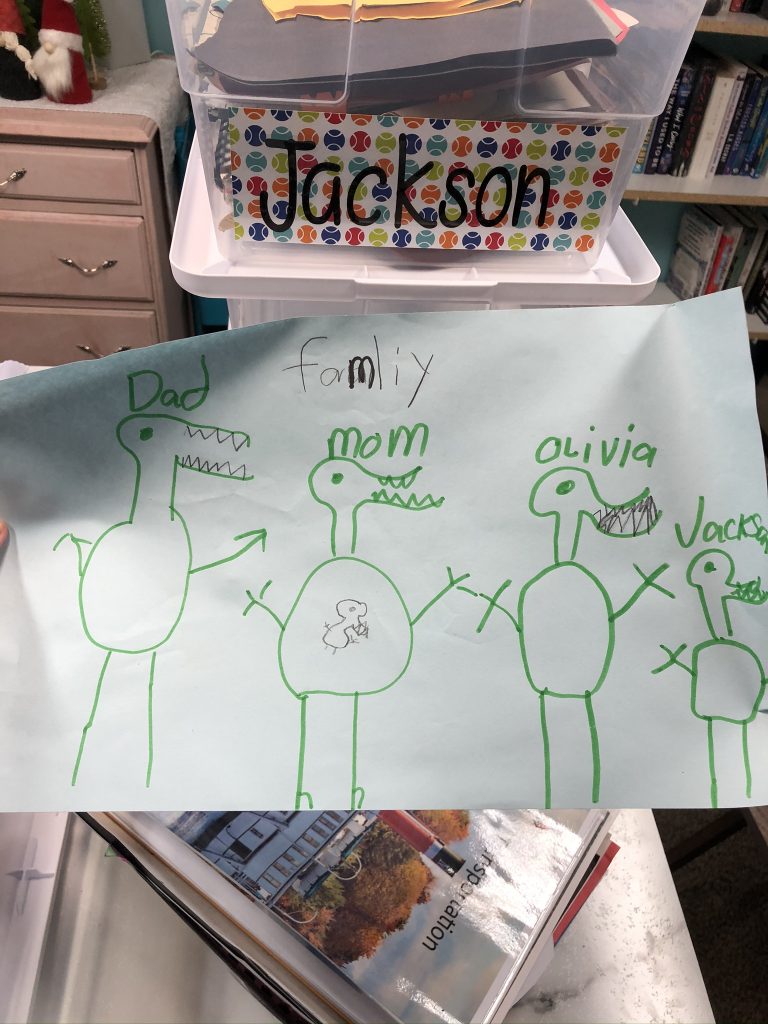 (I saved this one because I was pregnant with Penelope then and he drew her in my tummy. I think we’re dinosaurs?)

By the end of my sorting, I had everyone’s things in their own box. I stored the boxes on top of the dresser the other things are in, and they are tucked in a safe corner of my basement. The big kids had a great time going through the things I saved and I was surprised at how much they remembered about each thing. We had a great afternoon reminiscing.

But what about the mittens, man??

Great news! Because you did the boxes, you pretty much have everything you need to tackle winter gear for the whole family. Even better? You can reuse that rolling cart you’ve had in the garage for years collecting dust because you knew you’d need it again someday.

Today is the day, baby!

Grab the ugly rolling cart and give it a good cleaning. 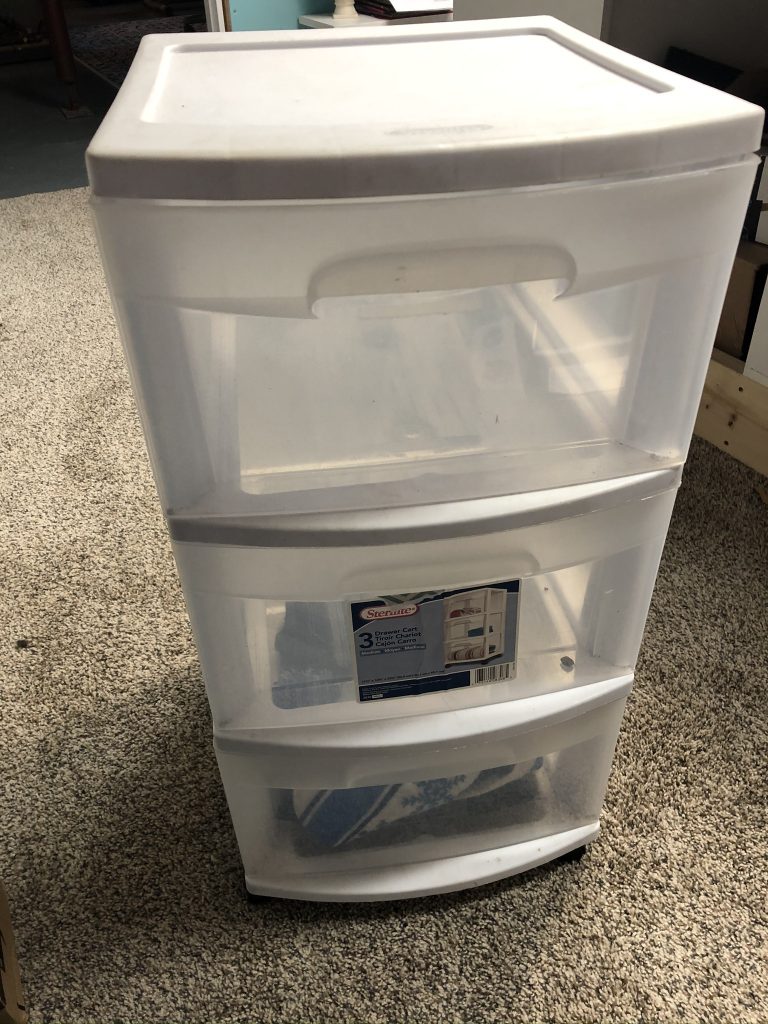 I had to get creative because I have six people in our family and my cart only had three drawers so I settled on two people per drawer. I used some of my left-over paper and letter stickers and made the same kind of label on the front. 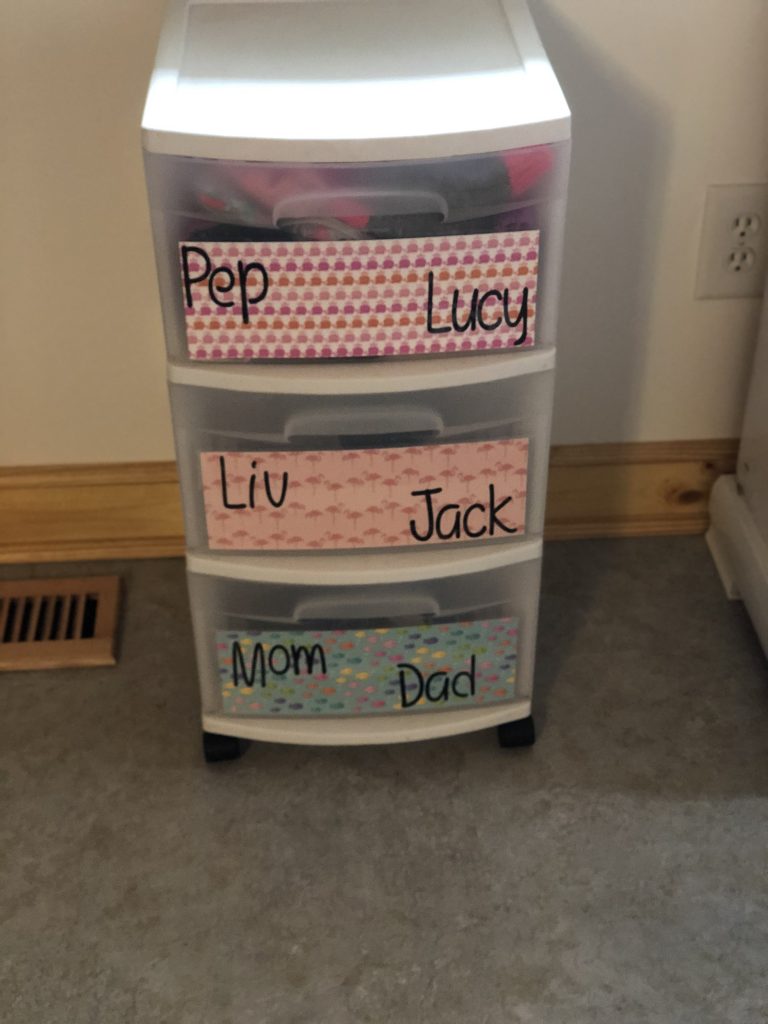 We have our cart in the kitchen right where you walk in and no joke, people actually put their stuff in the drawer. It’s magical!

Pro tip: I use the same kind of cart for swimsuits but store that in a hallway closet where the swim towels are. We can never find the swimsuits if we are going on a trip and I think we might have a pool at the hotel, and this has helped a LOT. Plus, everyone’s stuff is right there, I can sort out the too-small things quickly, put them away after a wash, and sometimes I store sandals for next season in there, too.

You can do it!

Hopefully these are a couple of tips that will cut down on the clutter around your house. I find if I start on one area and get it done, it inspires me to start on other areas and get things under control. I can’t control a pandemic, virtual learning, or Netflix offerings, but I can get my house organized. Mostly. Kind of.

The idea behind all of it, for me, is that some day my children will move out and maybe have families of their own. I am going to drop off their Forever Boxes and maybe they’ll go through them with their kids. Maybe their child will wear their sweater or use their blanket. Maybe they won’t, but I like knowing I’m giving them the option.