Rusty was an old German Shepherd/Golden Retriever/Heinz 57 kind of dog. We got him when I was pregnant with our son Ben and watched him become our children’s sidekick. He was an outdoor dog and preferred to roam our acreage and everyone else’s, as opposed to being indoors. He was always by the kids’ sides when they would walk out of the house. He loved to walk them to the bus stop and meet them again when they came home from school.

We chose to leave Rusty in Minnesota with our neighbors when we moved west to Oregon. He just wouldn’t have the same kind of room to roam there. He moved to the neighbor’s house up the dirt road and truly seemed smitten by his new family. It was hard for us to say goodbye to him, and even harder when I received an email one day from Rusty’s new family that said he went to sleep one morning and didn’t wake up; they were sure that he died of a broken heart. Our kids were 7 and 10 at the time. It was difficult to tell them, but we didn’t sugar coat it. My children’s tears were heart-wrenching. I didn’t want to put them through it again. I never thought we would get another dog. Ever.

When we moved back to Minnesota a year later, we felt emotionally ready for a new dog, and started to look. We came across someone who worked with rescued Labrador Retrievers. She was out of state but would bring one up to us when she drove into town next. First, there was a chocolate lab, and then a black lab, but they were given homes before we had the chance to put dibs on either one. Then it happened. I remember the four of us sitting around the computer opening up an attachment to a note saying that there was a dog for us: a four month old yellow lab with floppy ears, long legs and nervous eyes. He hadn’t been socialized. We believe he was to be used for a bait dog to train others. He would have surely been killed. But we got him! And there was a bond between him and our family immediately.

Over the course of the next 12 years, Vinny, our kind and patient yellow lab, became more than a pet for the kids. He was their little brother, their confidant, their friend who would sleep on their beds and wait for them to come home from school. He would make us all laugh with his silly noises and faces. He only ever wanted to be with us. Wherever we went, he was there, peeking around a corner or nudging our hands with his nose, looking for a hug or a kiss.

Vinny was my shop dog. He was always with me when I worked in the garage. He was more the face of our furniture business than I was and that was okay with me! He loved our customers and they loved him. One of our frequent customers started bringing treats to him when they stopped by. He LOVED the attention and soaked up every minute of it. When he passed away, we received hundreds of emails and messages.  Cards flooded our mailbox for a week and we received beautiful bouquets of flowers. He was loved by everyone.

This last year was hard for Vinny. He was showing signs of aging more each day. His hips were failing, he was having seizures, and he needed to be carried into the house at times when his legs were too weak to do it himself. We took him to the vet, put him on medication, and hoped to see some improvement in his health. There wasn’t any. During the holidays, when our son came home on military leave, we gently told him that we were almost certain that when he left again, it would be his last time seeing Vinny’s furry face. Our daughter came over and loved on him. She always liked to take Vinny’s red collar off and let him think he was naked! Saying goodbye to him was one of the hardest things our family has ever had to do.

My strong and loving husband, called the vet on a Wednesday morning after we watched our boy have such a hard time getting up from his bed and back into the house from his trip outside. Tears come easily now as I remember when we said goodbye.

The death of a beloved pet is hard on the whole family, but if your children are available to be with you, its okay to let them be a part of the experience. It’s okay for them to hug their furry friend and tell them how much they love them. It’s okay for your children to see your grief. It shows them that we are capable of loving to such an extent that we shed tears and we hurt. When my husband and I said goodbye to Vinny, we held him as our tears fell onto his fur and we told him what a good boy he had been, and that he was the best dog ever. It was hard! It was hard to come home without him.

It’s okay to talk about it and to cry. It’s okay to want to put the tennis balls, dog beds, and chew toys away so you don’t have to look at them. (Our Vinny may have been a dog, but he was a SPOILED dog that deserved to be spoiled!) We asked our adult children if they wanted something that would remind them of Vinny. Morgan has his red collar with his tags on it, and I’ve saved his camouflage collar with the bowtie on it for Ben. We have his paw print in clay. It was taken after he took his last breath. We will always smile when we think about him. He was the caboose… the third child in our family, and loved so very very much. So we grieve. And our children grieve, too. It’s a process. One that has no timeline from start to finish. It’s been 3 months and I still expect to see a goofy yellow lab with crooked smile greet me at the door when I come home. Or hear him come running, sliding across the slippery wooden floors like Tom Cruise in Risky Business, when I open a bag of chips in the kitchen.

Would we do it again? Would we do it all over, knowing the grief that we do now? Yes. A hundred times, yes. Even knowing how much our hearts hurt three months after we said goodbye, I do believe we will get another four-legged addition to our family someday. There is no dog in the world that could ever replace Vinny, but I just know that there is another one out there for us. When we’re ready, we will talk about it as a family. But for now, we will smile when we think of our goofy yellow lab, with floppy ears and soft fur, that loved us for almost 12 years… and who we loved *so very very much.*

Managing Screen Time in the Summer (Without Losing Your Mind) 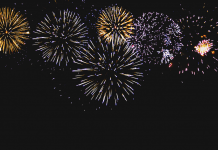 Andrea Jang - July 31, 2022 0
Neighbors gather together all around the nation on Tuesday, August 2nd, 2022 for National Night Out. National Night out in Duluth is a great...