Libby is a mom of two who is married to Max and studying to be a teacher. When she was 26, she gave birth to her first child. Below is her story. 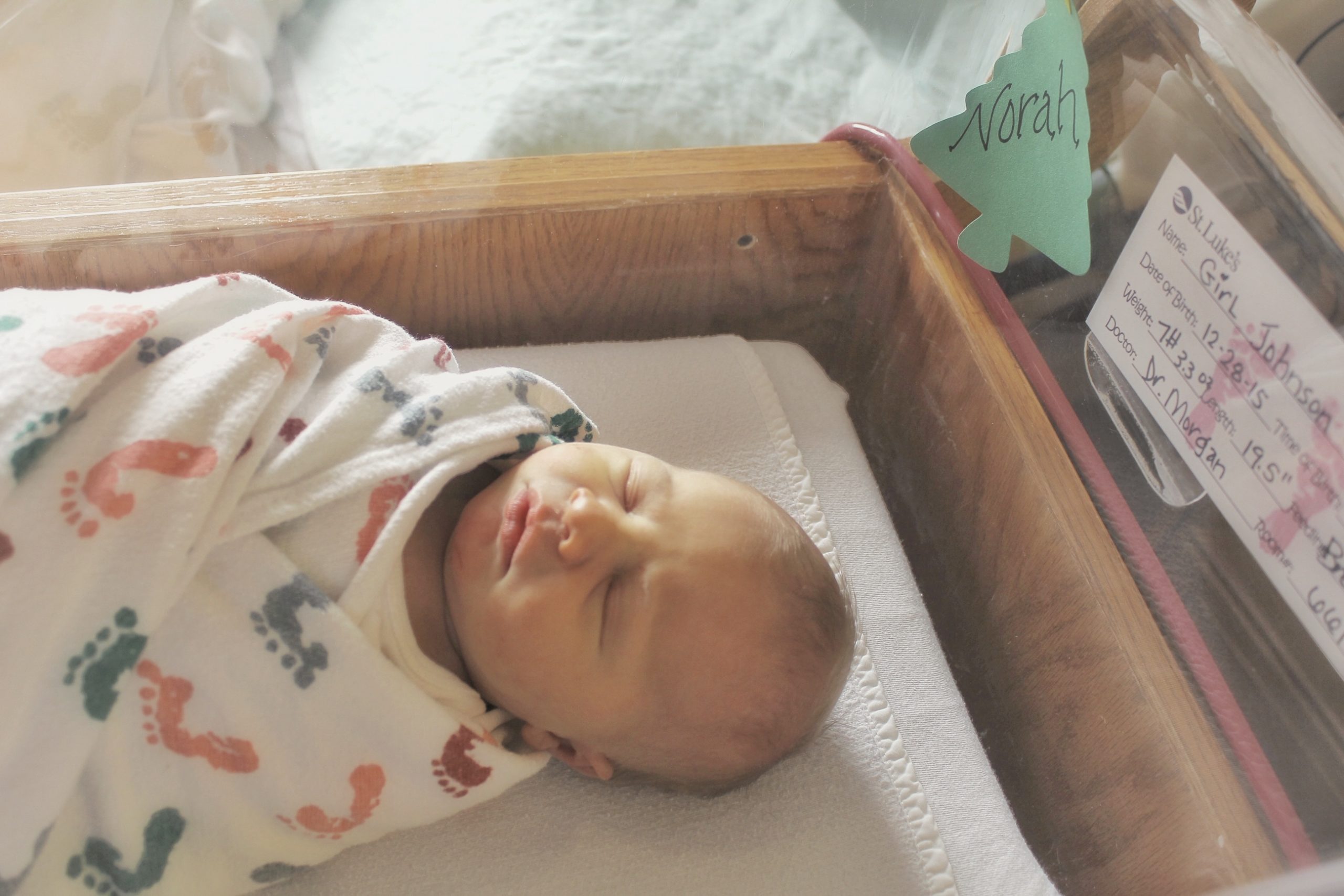 If I had to describe my first delivery in one word I would say: shocking. There are so many things people just don’t talk about surrounding birth, and I didn’t understand how intense labor and delivery would be. But the transition from being in pain to the euphoria of holding our newborn was indescribable and, in the end, it was totally worth it.

My husband and I got married and moved Duluth in early spring. Shortly after, I was feeling kind of off so I decided to take a pregnancy test. I was not expecting it to be positive, but to my surprise it was! It took a little bit to sink in because it wasn’t something we were expecting, but we were excited.

My grandpa had done his residency at St. Luke’s, so I knew the name because of him. I called and scheduled an appointment with a nurse practitioner (NP) for my first visit to St. Luke’s Obstetrics & Gynecology Associates. She helped me pick Dr. Mallof as my OB-GYN because she thought we’d be a good fit. She was totally right on. I loved every bit of my experience with Dr. Mallof.

Nine months later, I was ready. Or at least I thought I was ready. I had a very healthy, easy pregnancy but I think, no matter what, you’re still uncomfortable when you’re nine months pregnant and ready to be done! Also at that point, I had no idea when things were going to happen and I was ready for all the unknowns to be over.

I was due on January 1st and everyone told me that no one goes early with their first baby. I was not anticipating giving birth until after the holidays. My parents were visiting us for Christmas, so the day before they arrived, I got the house clean and ready for them.

That night, I was just exhausted. My back hurt and I couldn’t sleep. The whole next day it still hurt. I thought I just overdid it when I was cleaning. Then, with a Google search I found out I might be having contractions. I called my sister, who’s a nurse and has kids, and she said, “Yep! It sounds like you’re having contractions.”

After that, I very slowly progressed. We ran errands and went out to eat while I was having these mild contractions. On December 27, they were getting stronger. That day I just laid low. Finally around 9 pm, they were close enough together that it was time for us to go to St. Luke’s Birthing Center.

Nitrous oxide For the Pain

When we checked in, I was 3 centimeters (cm) dilated. They told me that nothing was going to happen too quickly, so I was glad they put me on some IV pain medication, and I took a nice little nap. I remember turning on the TV and then I just went to sleep.

It really didn’t get too painful until early the next morning. They gave me nitrous oxide (laughing gas) for pain management. I liked that. I hadn’t decided if I wanted an epidural yet. My birth plan was to start with the nitrous oxide and just see how things went. At 4 am on December 28, my dilation was increasing so they decided to break my water. Then things really started to pick up.

Around 6 am I was starting to get pretty uncomfortable. At that point I asked for an epidural. Since nitrous oxide was new at the time, they wanted me to be off of it for 30 minutes before they would give me an epidural. I couldn’t imagine being without pain management for that amount of time. I decided to forego the epidural and kept using the nitrous. 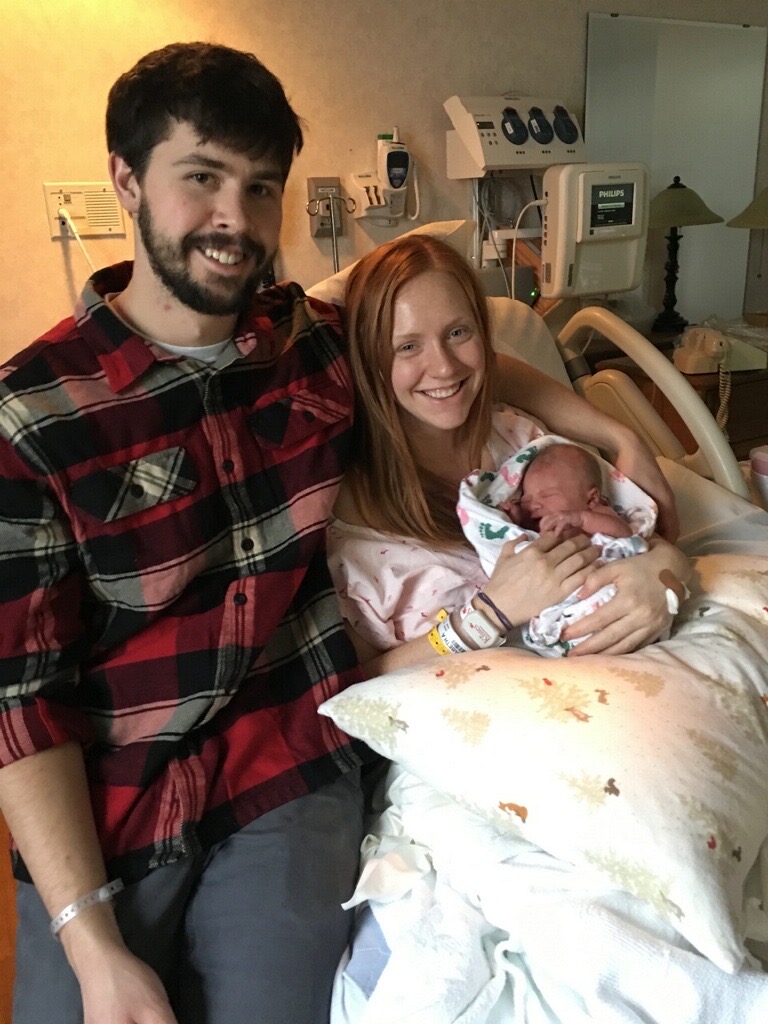 Welcome to the World, Norah!

The pain got more intense and I reached a point where I was nauseous. The nitrous was also making me a bit light-headed. One of the nurses advised me on some low-intervention ways to manage the pain, like trying different positions and massaging my back.

Around 8 am, it was time to push. The staff was awesome. They knew how close to the end I was but I didn’t. They just kept reassuring me: You’re almost there! Even though to me it felt like it was never going to end. They stayed positive and helped me understand that we were so close. I pushed for about an hour and that whole time frame is a blur.

Then, at seven pounds and two ounces, Norah arrived! As soon as I gave my final push and held her, I forgot about all the pain. I don’t know if it was the endorphins or what! It was pretty remarkable how you go from one extreme to another so quickly. Despite all the pain, three and a half years later we did it all over again for our second daughter, Josie!

Learning to Breastfeed and Heading Home

Most of my research before giving birth was on the birthing process, so I didn’t know what to expect after she was born. My biggest concern was learning how to breastfeed. I didn’t expect it to be hard at all, but it was.

I was fully supported from the staff while I was at St. Luke’s and then came back afterwards for a follow-up appointment at St. Luke’s AfterCare Clinic for some additional lactation help. In the end, I got all the help that I needed.

After Norah’s birth, we were in the hospital for two full days. At that point I was ready to be in my own bed, but I did miss the support of the staff once we left. It was kind of surreal to be totally on our own with her!

This is how Libby remembers the day Norah was born. To hear what Norah remembers, watch her story (she’s the little blondie at the beginning!). You can also meet her little sister Josie in this video (she’s the youngest). Then visit StLukesBaby.com for more stories.