Our family, like so many of yours, has had a fairly low-key summer. We’ve done a good job quarantining and avoid people, so much so that my kids’ first car ride after the pandemic began lockdown began was not until May.

It blew their minds.

All four of them got car sick (no pukers, thankfully), kept telling me to slow down (we were doing 35 mph), and it was like none of them had even been in, let alone seen, a car. It was kind of hilarious and sad.

A week ago, I had to take both of my youngest kids to Walmart to find the least expensive gym shoes I could find. (I know full well they will outgrow by November so I’m not about to buy them name brand anything!) We masked up, walked in and, no joke, my four-year-old clenches her little fists and said loudly, “This is so exciting!”

That’s just sad. It’s also embarrassing when everyone looks at you like you’ve never taken your child out of the house. I decided right then that while we can’t go on vacation, we could plan a nice day trip.

When I think of things the are the epitome of summer and bring happiness, I think of sunflowers. Coincidentally, (or not because big brother is always watching), I started to see sunflower ads and photos of people going to sunflower fields all over Facebook. I thought, “That’s a pretty rad idea!”

I started to research and found out that most sunflower fields were already closed for the season; it was a real bummer. But suddenly, like a sign from above, someone posted about a field almost two hours south that planted two crops so they still had flowers blooming! I decide to throw caution to the wind and tell my family (there are six of us total) that we were going on a trip! I’m a particularly cruel kind of mom and most of the time never tell anyone where we’re going until we’re there or almost there so nobody blinked an eye when I said it was a surprise.

I got us a dog sitter because Twinky (the Dinky Dog) has what has to be the world’s smallest dog bladder and I couldn’t have him peeing on the floor while we were out for the day. I got all of us up, fed, dressed, and in the car by 10:00 a.m. knowing we won’t get there until noon at best.

I yelled to my husband to pack up the snacks up while I tried to apply eyeliner for the first time in months. I grabbed a change of pants and underwear at the very last minute because I know if I don’t my youngest will undoubtedly pee in her car seat after telling me she absolutely does NOT have to pee when we stop for a bathroom break.

When we got on the road, I found myself pleasantly surprised at how well the whole thing was going. I mentally planned out the next day trip we could maybe do over the next weekend. Then… we stopped for lunch and found ourselves waiting over 30 minutes for half-cooked food we didn’t even order. Apparently at this point, I started having the don’t-complain-because-mom-isn’t-in-the-mood face, and everyone ate whatever surprise was in the bag.

We kept driving and just as the kids started to get on my nerves, we saw it: The Sunflower Field of Dreams! (Not the actual name but that is what I had been building it up as in my head.) I finally explained to everyone what we were doing.

I should have taken a photo of their faces because it could have gone in the dictionary next to “disappointment”.

Nevertheless, we all got out of the car and bought our tickets.

When I say that I really tried to cheerlead the fam into the field in search of flowers, I mean it. The little girls rallied, but my oldest kids were not thrilled. We were there for five minutes when my son said his eyes hurt and, admittedly, I had forgotten all about his allergies and realized that maybe this had been a poor idea. He then reminded me of all the times I have forgotten he has allergies and as the list grew, it sounded pretty bad.

It was then that my youngest piped up and told me her eyes hurt, too, and I have no idea if they really did or if it was just the popular ailment of the hour. My oldest daughter told me her knees hurt because fifteen is when you start having bum knees, I guess.

My five-year-old tried to join a family that spoke no English and literally would not leave them alone. She insisted that they were talking to her while I tried to explain that they were probably talking about her because she was not theirs. I tried to apologize to the family in Spanish but I couldn’t remember Spanish from high school and my fifteen-year-old who takes a Spanish class doesn’t help, and became incredibly awkward. We ended up running into them several times and I can only imagine the stories they are now telling people about their trip to the sunflower field.

Finally, we made it to a spot dubbed the Stairway to Sunflower Heaven or something equally cheesy. You guys, it was straight up depressing. 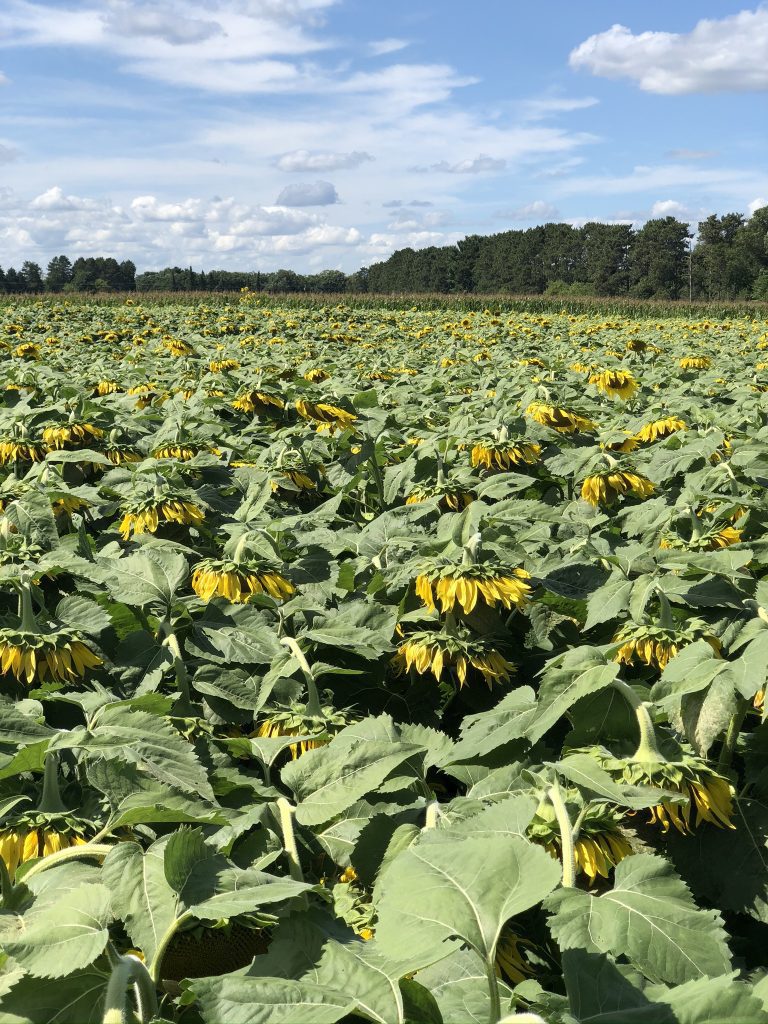 Now, if the guy we had bought tickets from hadn’t just told us that the fields of flowers were “really pretty” then we likely would have just turned ourselves around. Seeing a field of droopy, dying sunflowers felt like a real metaphor for our summer and for 2020. So we pressed on in search of something more… alive.

We started looking for this mythical section with pretty blooming flowers and once we got there, I found one. I found only ONE flower kind of standing up. 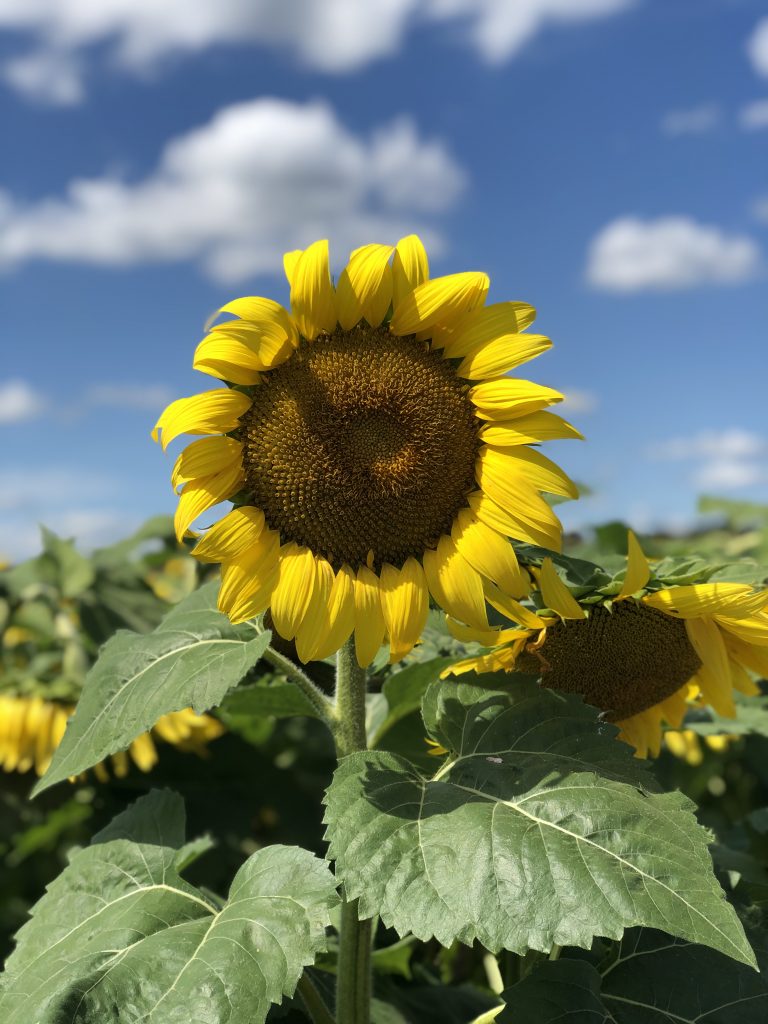 My son dryly said, “Well, we’ve seen it, now how do we get out of here?” and that’s when I felt like Clark Griswold himself.

I finally understood Clark’s dreams of family fun only to have it ruined time and time again. We didn’t leave with anyone dead strapped to our roof but we did take home four dead flowers as a parting gift. We are supposed to use it for bird seed but as of right now they are rotting on my desk and I don’t have the energy to move them to anywhere else. 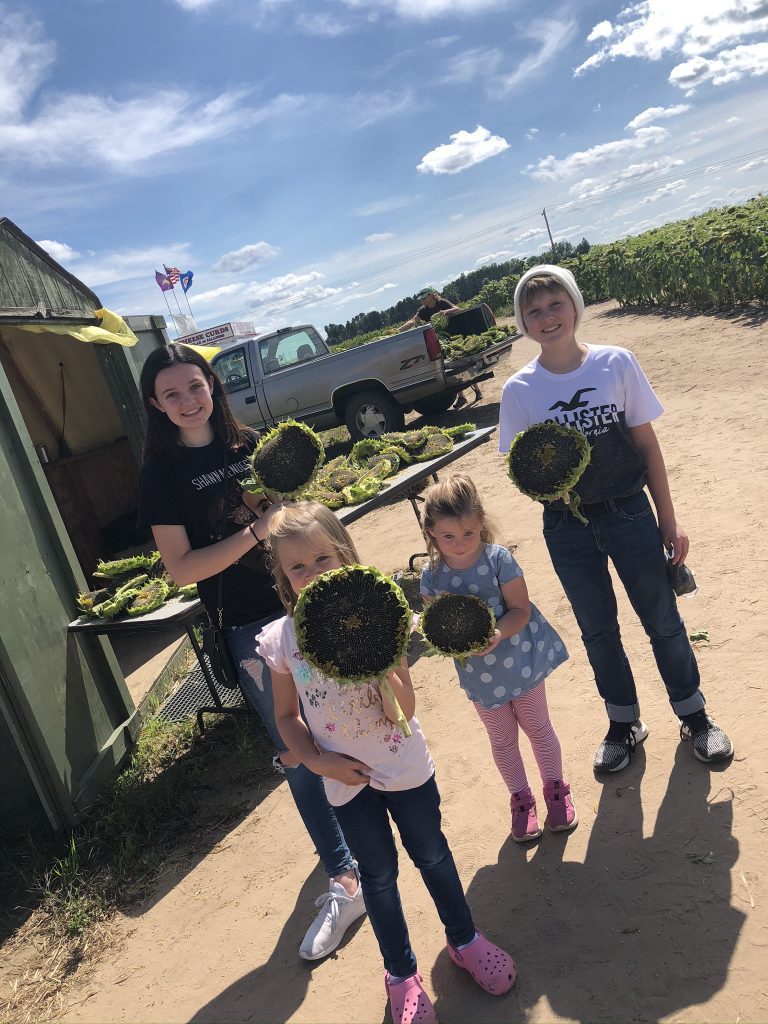 I mean, look at the absolute joy on those faces!

Our plan is to get to Florida this year to see family, but Covid makes me nervous and I feel like it’ll be a last-minute decision whether we go or not.

I don’t know how other families are coping with isolation vs. wanderlust, but here’s a hard-earned tip: now is not the time for sunflower fields.

(Are you wondering if my youngest peed her pants? She did NOT! She didn’t because I had spare pants and I appreciate 2020 keeping that tradition alive. See? 2020 isn’t all bad, you guys! I’m not having to scrub out a car seat!)