I like to believe that I am open minded. I adore parents who allow their children to follow their passion and accept their quirks, no matter what they are, no matter how out of the mainstream they might be. I want people to be happy and kind and overwhelmingly themselves. I’m 100% behind that, and we try very hard in our household to make it clear that everyone is different and unique.

So I caught myself quite off guard at Target recently with one of my 3.5 year old twin sons. Upon his request, we sifted through sandals in search of a pair he might like. Already wearing an Easter fedora hat that I had told him he could have (a cowboy hat, he called it), we looked through the sandal variety. He tried on a pair featuring sunglasses, a pair with monsters, and he really wanted a pair with Batman on them, but in the end, none had felt just right.

I was digging for something else to show him, when around the display my son came out with a pair of clear, glitter jelly shoes. My first thought — but luckily not my first response — was, Oh those are for girls, buddy. Instead I stood there, trying to wrap my head around a number of things, but most importantly, that here I was faced head-on with a stupid gender stereotype and maybe I wasn’t as open-minded as I thought I was.

My son was ecstatic. After all, they were sparkly and they were super cute. Gold sparkle on sandals was what he saw, and he couldn’t wait to get them on. I knelt down on the floor and gritted my teeth. I knew that my son didn’t need to know about the stereotypes I had grown to become all too aware of. He didn’t need to know that, for some reason, they don’t put jelly shoes on the side they steer little boys toward, and he didn’t need to be concerned with what anyone else thought about his shoes. He put them on, walked around, and told me how well they fit. Which should be all I normally would care about as a mom, but for some reason, it wasn’t.

My son was trying on glitter jelly shoes and I was truly conflicted about it for a minute. And once I snapped out of the pettiness of my own fragile ego, I had to reconsider just how open my own mind was. Why can’t boys wear glitter or jelly shoes or pink or shirts with unicorns? Who makes these stupid rules and why in 2019 does it matter?

Then I realized: it didn’t. My son isn’t dictated by the ways of the world yet, and his innocence isn’t lost on me. It was my attempt in my mind to protect my son from other possible kids and possible comments, and the stance we sometimes take, even when unfounded, to bubblewrap our kids. My fleeting image of him strolling into preschool with those on his feet was my fear projected on him — it sure wasn’t his. At no point did I let my internal conflict spill out for my son to see or hear. I knew one conversation I was never going to have was why he couldn’t get glitter jelly shoes. The world may box him one day, but it sure isn’t about to start with me at a sandal display. 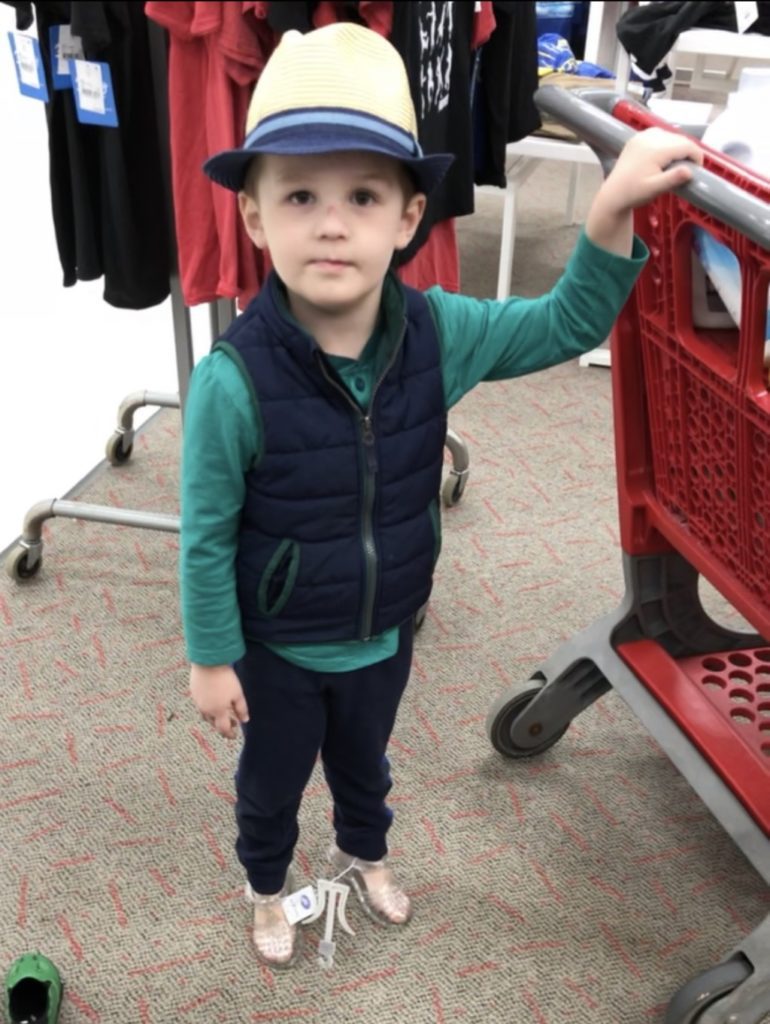 As it turned out, he didn’t have the right size on, and though we looked for his size, we couldn’t find it. So with disregard to my new bit of acceptance of sparkles, he asked to try on Spiderman sandals (which left me more confused than the glitter jelly shoes because he doesn’t know anything about Spiderman yet).

There, in the shoe aisle, I was suddenly reminded that three-year olds are exactly that — three-year olds. They aren’t cynics, they don’t judge, they don’t subscribe to gender stereotypes, and they have a right to experience the world without our adult biases. My job is to truly let my sons be the children they still are. Children who are unbiased and careful and deserve to discover the world on their own terms. Children who think glitter is mesmerizing and looks awesome on footwear (let’s be honest, it does). My son wasn’t overthinking it or making some point with those sparkly shoes, he was seeing them for exactly what they were — shiny shoes he could wear. In every single way, he was spot on.

As it turns out, we didn’t end up buying any sandals. Which is really too bad because if we had found a size nine in the glitter jelly shoes, they would have come home with us.