My son has always been a noisy sleeper. When he was a tiny baby it was the normal baby grunts and squeaks but as he got older he really started snoring, and often coughing, in his sleep. Around the age of 2, he started getting strep throat which we attributed to being at daycare. In the span of a year he had strep five times. It was at this point his regular doctor referred us to an ear, nose and, throat doctor.

We saw a wonderful Physician’s Assistant who recommended we try allergy medicine for a couple months to see if it helped with bringing the size of his tonsils down (every time we went into the doctor they made the same comment: “wow, he has big tonsils” and we always thought that it must be because of an infection of some sort). For 3 months we gave him children’s Claritin hoping that would solve our problems. It helped a little bit–his nose stopped running constantly and his snoring went down a little–but not enough. We contacted the ENT department and got a consult appointment with a surgeon.

At this point, my son had been free of strep throat for about 5 months, and had been on the allergy meds for about 3 months, but he still wasn’t sleeping well. According to the ENT, they really don’t like taking tonsils out as much as they used to because, surprise surprise, they actually serve a purpose! We were also told that as kids get bigger their tonsils actually shrink and usually don’t cause any issues. Well, after hearing what his symptoms were; snoring, not sleeping well, coughing in his sleep, and always seeming tired, and looking in his throat and doctor immediately said, “He has Pediatric Sleep Breathing Disorder.” In other words: he has sleep apnea.

What is Pediatric Sleep Breathing Disorder?

“Pediatric sleep-disordered breathing (SDB) is a general term for breathing difficulties during sleep. SDB can range from frequent loud snoring to obstructive sleep apnea (OSA), a condition where part, or all, of the airway is blocked repeatedly during sleep”

Symptoms include snoring, irritability, bedding wetting, learning difficulties, slow growth, and in extreme cases, cardiovascular difficulties and obesity. My son was presenting with the first 3 symptoms plus rather large tonsils that were not infected. The doctor recommended that we remove his tonsils and adenoids.

A month later we found ourselves getting checked in for surgery on a very windy, cold morning in Duluth. The hospital staff made it an amazing experience for all of us. They put mom and dad’s mind at ease by explaining everything that was going to happen and encouraging us to be with our son every step of the way. Our 3-year-old told us he thought the big hospital was really fun and that he really liked playing there. The nurses putting Cars stickers on his hospital bracelet and gave him coloring books and a tablet that showed all of the pictures of the operating room so he knew what he was going to see when he was sent to surgery. He got to wear cool pajamas and then play with fun toys to while we waited for the OR to be ready. I think his favorite part was seeing daddy in full scrubs with the hat and booties because daddy got to go with him until he fell asleep, which took less than 5 minutes! 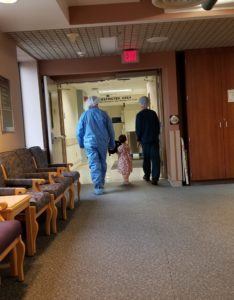 In the family waiting area, we got coffee and watched the screen to see his designated number updated as the procedure progressed and he moved to recovery. The surgeon came to talk to us about how things went, he only lost about a tablespoon of blood during the entire procedure and everything now looked great. The amazing thing was that once he was under anesthesia and his throat muscles were completely relaxed, his tonsils were actually touching in the back of his throat! Apparently the nurse anesthetist could not believe how big his normal, uninfected tonsils were. This definitely made us feel like we made the right decision to get them removed.

The worst part of the entire process was him waking up from surgery but that soon passed and less than 2 hours after surgery he had gone through 2 popsicles and was watching a movie on his tablet. We were soon sent home with loads of pain meds and instruction to keep him quiet for a couple weeks. 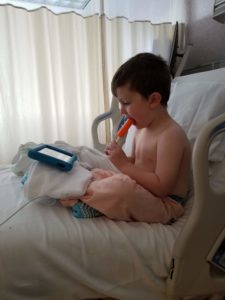 They say that the younger they are, the quicker they will bounce back from surgery and I found that to be true. Within three days, it became almost impossible to keep him relaxed and quiet; we resorted to a lot of screen time! We also found that you definitely need to keep up with the pain meds, even waking them up in the middle of the night to keep something on board. Popsicles, ice cream, mac and cheese, yogurt, and cheese were pretty much all he ate for about 1.5 weeks and he drank a lot of water out of his special water bottle. Two weeks post surgery he was back to eating and playing like a typical three year old!

By three weeks post-surgery, he was sleeping quietly through the night! My husband said it was crazy how quiet his breathing is now; he actually had to put his hand on his chest to make sure was still breathing one night when he went to check on him. I had trouble sleeping the first few nights because I could always hear him snoring and coughing in the room next to ours and now it’s just quiet! I have also seen that he is more willing to wake up in the morning and taking shorter naps now that he is getting quality sleep at night.

It took a long time and a lot of nagging to finally get the referral, diagnosis, and procedure done for our son, but no matter what we continued to advocate and push because we knew something wasn’t quite right. If your parental instincts tell you something isn’t right, don’t give up. Seek out second, third, and fourth opinions if needed.