I have been talking about buying new underwear for a while now. I will be real with you, my current collection is nothing to brag about, in fact, it is pretty undesirable. I would categorize most of them as high-waist granny panties that I bought for comfort and nothing more. Over the years they have all become my period underwear. I should probably just stop here, but I have a feeling I am not alone. I actually can’t even tell you the last time I bought new pairs but it was definitely sometime before my first child was born. I know, slightly mortifying.

Recently, the idea of buying new underwear has consumed me more than usual. The brilliant idea usually pops into my head when my husband and I are going to bed, as I am switching from my yoga pants and sweatshirt to what I wear to bed. I have been starting to get just a little embarrassed about my underwear and for some reason, I’ll make a comment like “I promise I am going to buy new underwear.”  I am only saying this because it makes me feel better, I mean at least I am acknowledging that it needs to happen.  I want to make it clear that at no point has my husband ever made a comment or made me feel like my saggy stained underwear is undesirable. 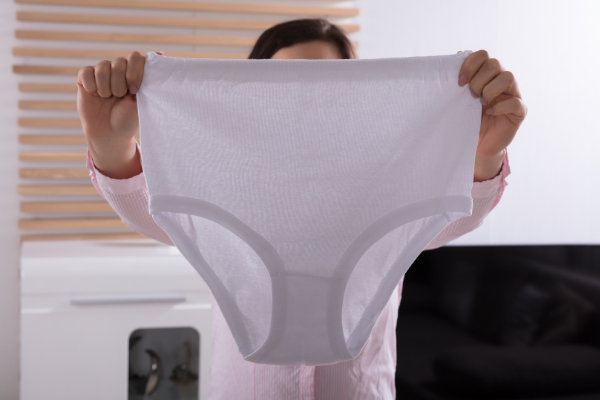 Well, today I went on my phone, perused amazon and bought new underwear! Just like that, it was so easy. I even bought a size smaller to help get rid of that mom-sag that my current underwear has developed.

Some might say, “Come on Mollie — Target, Sam’s Club, Fleet Farm and more, sell underwear.” I get this, but as a mom everything I do and buy is 99% for my kiddos.  I know it doesn’t have to be that way, but it’s just how it is and it makes me happy. I get that while I am in the diaper aisle at Target I could literally walk 30 feet into the women’s department and pick from a plethora of underwear. Instead, I walk 20 feet in the other direction and glide my fingers across the white Target hangers holding the bathing suits. And somewhat ironic, with just one turn to the left, there is the underwear stand for the kids and I grab a couple. {Insert face plant emoji here.}

When I turned to my husband one night and asked “Do you care if I write a blog about my underwear?” His response was “No.”  He continued to comment, “I fold it and I see the stains.” Man, how did I let it get to this point?!

This was not me, and sometimes I get a little reminder of that. Under all my granny, period stained underwear, is sexy lace bikini underwear and I even kept one thong for good measure. It’s a glimpse of a memory of what my underwear collection was before I had kids.

Don’t get me wrong, there is no way that thong is ever going back on this body, but something hit me and I knew I needed to do something for me. So, Duluth moms, here is your reminder to go out and do something for yourself! Go out and buy some new underwear, or order it off Amazon like me.