I have studied my now five and half year-old sons closely over the last year. Partly because I was given the gift of time with them, obviously, but also because they have been inching up on the age I was when my own father was killed by a drunk driver. It’s an age I have had checked off in my head for them since they were born — what they would be like, what I could learn from them about myself at the age I lost my dad. It’s fascinating to see these young humans and the love they have for people and family members. Their capacity for love is at times never-ending, and they are feelers and empathetic with big hearts. They love fiercely their family and it has helped to make me realize I fiercely loved my dad too. He mattered immensely in my daily life and surely must have impacted me in so many ways, I just cannot consciously pull it from memory. My sons are connecting me to my own past, and while I knew this would someday happen, it’s been life-altering for me to just watch them at times as they close into my age (I was two weeks shy of six).

It occurred to me so many times since January, when our hours of weekly or bi-weekly visits outside my Grandma’s patio were allowed to move inside to her apartment, that I was walking them into something that I knew would cause them heartache. As they raced down the hall to her apartment, beyond excited to drink Mountain Dew with her and challenge her to tic-tac-toe games, my heart knew that this wouldn’t last forever. I knew what the opposite of that joy was going to be, and it’s exactly what it has felt like over the past few weeks since we had to say goodbye to grandma. 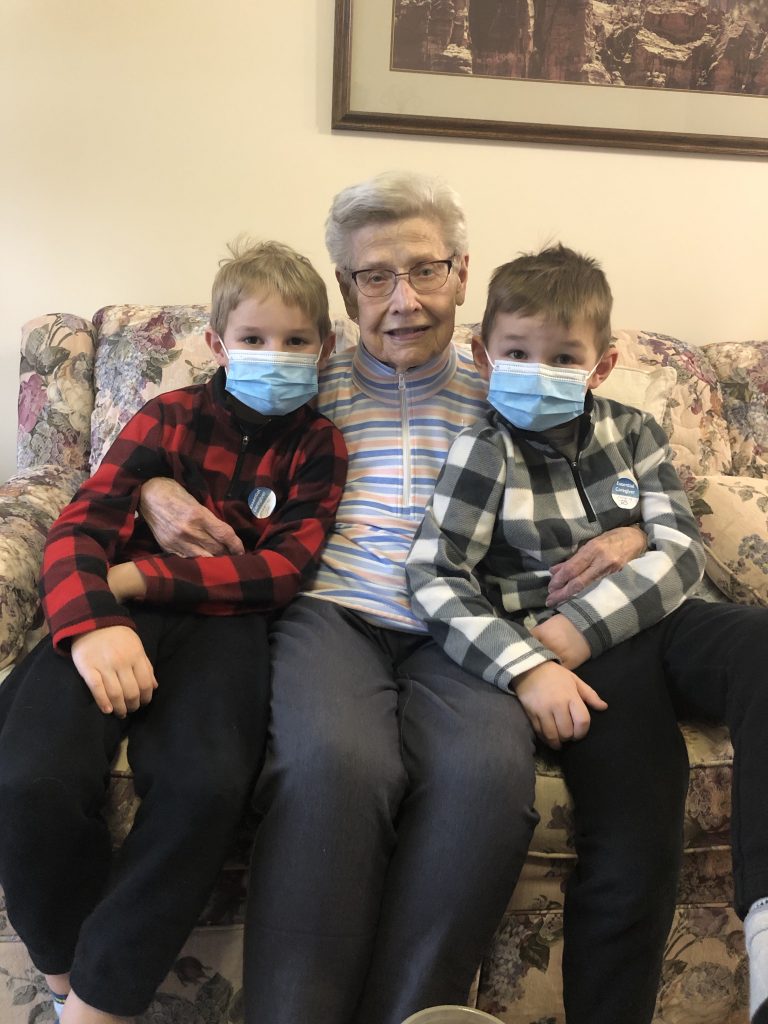 But my sons are simply experiencing life. It’s beyond messy. It breaks your heart. It floors your soul. But it also gives you picnics and donuts and Mt. Dew with your Great Grandma. Every time my sons told me that her apartment was their favorite place to be, I clenched my jaw. When Lachlan told me once in February that my grandma was one of his best friends and he didn’t know what he would do without her, I held my breath. I could warn them, I could somehow protect them from this, from the pain I knew I was also going to feel saying goodbye to grandma. Sure, I could have done that. But I would have been robbing them of a beautiful part of life.  Without heartache, there is no joy. I also would have taken away their chance to know the love of my Grandma and to experience something that has arguably influenced them more in the last year than anything else.

I gave them the option to go see my grandma as she began her struggle out of this life. They saw my grandpa dying from COVID through a window back in October and it quieted them. I didn’t know if they would want that situation again, but they did. They were adamant that it was important to them so I fought to make sure they got it. I didn’t get to say goodbye to my dad, and without question that closure isn’t possible fully. My sons? They will get closure anytime they can and want it, this time that meant saying goodbye to grandma.

So we walked into my grandma’s room and watched her silently suffer (she was in pain that day, unfortunately). They held her hand and talked to her and told her how much she meant to them, and how much they loved her. They asked to stay longer and never wanted to leave. I cursed myself for a second for bringing them into this moment before truly being able to grasp what a true gift it had all been. A gut-wrenching, heartbreaking moment that consumed us all but also gave them the freedom to love someone fully that they were aware they would lose.

My grandma was 94 when the pandemic hit, 95 when she died. While you wouldn’t have known it by talking to her, she was riddled with cancer which she had somehow kept at bay for over three years. I knew the relationship they were building with her over the past year couldn’t last, and I knew the journey would end in heartbreak. I walked my sons right into the throes of grief. I knew our journey would end here, next to my grandma’s hospice bed, letting them say all the things young children can say to a dying human they love dearly. I also know I would allow the boys to experience it all again in a heartbeat.

Grief is hard enough to manage on our own. When we are parents, we not only have to process our own, but our children’s. It’s hard. We lost two dogs and a cat a year ago — right before we were only allowed outside visits to my grandma’s, and I remember thinking how hard that was. This has been a whole other world.

In all the heartache these last few weeks and the sadness I’ve felt as we said goodbye to grandma, I’ve taken a great deal of solace in how well my sons really knew her, my other mom, a force so strong in my family’s life. They got to know her, they adored and loved her. Yes, the mess is hard. It doesn’t stop being hard either. But they also know that we miss the people we love the most and that it’s ok to miss her deeply. They got to know one of the biggest pieces of me, and she became a big part of them. The loss feels heavy right now, but the love they gained and the place she holds in their little hearts will be forever worth it.