Spring is in the air; the snow is melting, birds are chirping and the sun is out! Another sign of spring is that my mailbox is full of gardening and seed magazines; the person who lived in our house before us loved to garden. I actually made my husband dig out the large, raised and fenced garden and replace it with a patio with fire pit. I have a brown thumb.

I love the idea of growing my own vegetables and planting flowers every spring.  Growing up I would spend summers at my grandparents’ farm helping my grandma in her two large gardens. Maybe she had a feeling I didn’t have a knack for gardening even at a young of age because all she would let me do is pick the red tomatoes and squish the potato bugs. I was not allowed to touch anything else. Now that my son is old enough to get excited about nature and growing things, I really want to try and plant something, but my track record isn’t the greatest.

My first try at growing vegetables ended with my dog eating all the baby tomatoes right off the plant. My second try involved me getting a giant stock tank and putting it on the deck and growing tomatoes and cucumbers in it.  I put the hose on one day and went inside for something, ended up falling asleep on the couch for a couple of hours, and woke to water-logged plants that didn’t end up making it.  My next attempt was flowers, but they withered away, too. Too much sun? Not enough sun? Too much water? Not enough water? I will never know.

I decided to take a break from outdoor plants and got some succulents for my office at my new job. “You can’t kill these!” is what they told me. I got them in October and they were dead by Christmas.

Last spring I resolved that my two year-old needed to see plants grow so I got some pots and some zucchini seeds. From what I had heard and seen, zucchini plants were hardy, easy to grow, and usually produced lots, so I took the plunge.

We checked them almost every day and watered them 3-4 times a week. Sure enough, they started to grow! My son was so excited but I knew we were not out of the woods yet. I made sure we checked and cared for them every day for weeks and weeks. They bloomed so I knew there was a chance we would get some zucchini. One day I spotted a tiny zucchini! Then another and another! I counted at least six on the three plants we had. We watched them grow and get bigger and a few more appeared. We were getting excited because it was almost time to harvest our first zucchini!

On Tuesday September 18, 2018, I walked to the back deck to water the zucchini and… they were all gone! The only thing left was the plants and some small chunks of chewed zucchini at the edge of the deck. The squirrels had eaten all the zucchini my son and I had spent so much time growing and caring for.  I am not going to lie, I almost cried. I had failed again at harvesting my own vegetables. 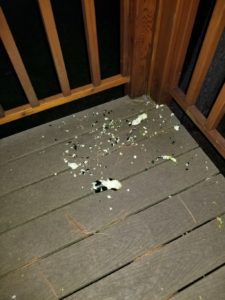 I want to teach my son to never give up and to keep trying, but this spring I think I will leave the gardening to someone else. Instead, I will look forward to the Farmers Market opening!